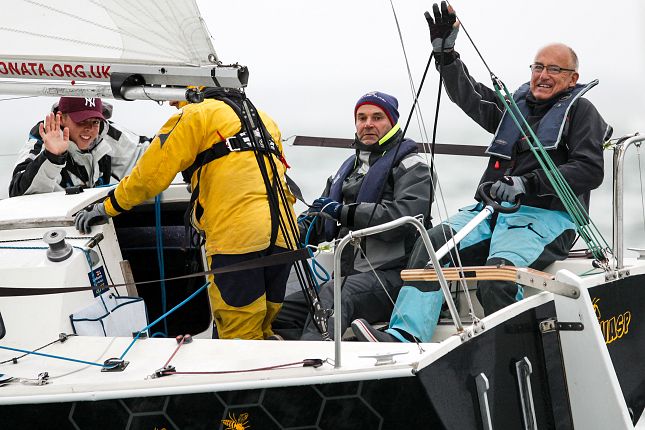 What a difference a year makes! 2016, westerly, around 28 knots across the deck, we don’t have a wind instrument, but BFG getting dragged sideways off Ventnor for 10 minutes when she got thrown by a rather large wave up under  her quarter, well, that’s my excuse, nothing to do with my helmsmanship, and Kallista dropping her rig around the same time. Bit of a blow.

This year, wonderful. (apart from the unfriendly start time of 06.30) Breakfast at 04.30 was a challenge. It was a big-boat day, lots of reaches. A very big boat, one of a stable of boats called “Yes”, owned, apparently, by the boss of National Car Parks, broke the monohull time around the Isle. Think on that next time you punch your card into an NCP Car Park kiosk, you are subsidising the guy who won the Golden Bowl.

It was a bit different at our end of the 1300+ total fleet. IRC Class 3D, the one within which we race for the Sonata Salver. BFG, always a bit maverick, chose a pin-end favoured start, it is a very long line. Kallista and Wasp, I guess, took the tide advantage closer to the Squadron. We never saw our competing Sonatas until after the Needles gap and they were both in front of us. In my defence, on the, several wind predictions we had, there was a possibility that windward advantage would have paid handsomely. Not so, tide advantage won out. C’est La Vie. RTI is all about judgement calls on tide/wind, some navigation and, this year, boat speed. Bit different from most Sonata racing.

Kallista and BFG played games between them down the southern side, again, up the Solent side. Think our positions changed at least four times. Great, competitive racing between us. We, all three, finished within minutes of each other. Bit of an accolade to the skills of our Sonata fleet crews over an 8-hour race.

I have to apologise to Chris, Kallista, for running him so far into Sandown Bay, just because I could. We didn’t have, at the time, a working depth-sounder. We were working on where the seaweed was in relation to our keel. Turns out, Chris told us later, it was just 20cm from a hit. Sorry,  Chris, guess it’s our east coast training where sandbanks with drying heights appear out of sight of land.

Well done, Wasp, you sailed an excellent race. Your name on the Salver this year, then. Bit to go, BFG, three times, Kallister, once, I think, Chris Ratsey, a sailmaker of that parish, four.