The island in question, Wight, and the bit of water between it and the mainland is subject to an alarming amount of vagaries of tide, windshifts, ferries, and on the RTI, the participation of many who have no clue at all about anything, let alone the racing rules of sailing.

So we enter the race at our peril. In our favour, we have done it before. We have very clever tide charts that tell us where the water flows at which time and a weather forecast on the evening before by Mr Tibbs of (I dare not name the Company). 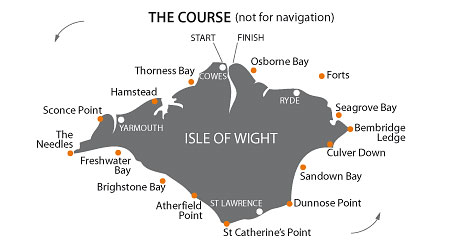 We arrive at the start line in due time. Thank you ISC for making our start so late that I could have a full English before leaving the B&B. We peruse the options and, in the knowledge that ‘up the Green’ is the best tide advantage, we attack the line from well over it, i.e. to the west, on the basis that no other idiots will be there and we will be moving at full chat when we do it and on starboard. What could be better? In fact, we did make a cracking start, not quite as close to the Green as I had planned, but to windward of that fleet bunch…clear air…bingo!

On reaching the Island shore around Egypt Point, exactly as we had planned, we tacked and the jib sheet parted company with the jib. We had some moments of confusion whilst we re-attached and then we were off again. The Solent beat is all about clear air and avoiding Starboards which we did and found Callista, a Cowes Sonata on the way. Callista and ourselves had an interesting tussle up to the Needles. At Hurst Castle there is one of the tide sluices to advantage. Callista got there, we didn’t due to a whole line of AWBs (average white boats) on starboard, so he rounded the Needles Gap between the Varvassie wreck and the chalky bit in front. Damn.

Me, a pensioner with a bus pass decided it was time to hand over to some younger talent so Sharon took the helm and pulled out 5 minutes over Callista on the reach from Needles to St Cat’s point. Great downwind surfing sailing – she is a bit good at that. At St Cat’s I had a memory of us losing the rudder in the 2011 RTI and being a bit worried about parking BFG on the St Cat’s rocks because we were a bit close, we aimed a tad out. Callista didn’t, cut the rocks close and, bugger it, got well in front on the tide sluice to the extent that not only did he massacre Sharon’s five minute lead, he was another five minutes in front. Double bugger.

We proceeded downwind, an interesting course in 10 ft seas and 30 knots and lots of helm movements were required. We lost it once, I blame the water, my crew might not agree, but I insist it was a rogue wave. Minutes later we heard a VHF that Callista had lost her rig. Such a shame as I was looking forward to the tussle up Ryde sands. He and his crew were safe, thank God, and we hope that he will be against us on the Nationals in three weeks time.

Beat (sort of) to the Finish

The bit around Bembridge Ledge buoy was only memorable for the fact that I had room on a big AWB who I had to remind that I needed plenty because clouting it (a massive iron thing) was not something I needed in those weather conditions and he could give me more. Hey ho, that’s RTI all over. Actually, his rounding then got screwed by the followers and I never saw him again.

The beat to the finish was more of a port tack run and a hitch as far inshore as we could – much in contrast to our previous RTIs when we were battling with the old Gaffers for prime position over the Ryde Sands and Bob Fisher laughed when I called for water. But the wind was more west.

The finish off the Snape is a bun fight because anyone who has cut close to the Island shore, as we did, has to navigate the line of starboard boats coming in from mid channel. This is a place where lots of positions are won and lost. Fortunately, we managed to avoid confrontation, although a certain Contessa might not agree, and we were home, but not very dry.

If you want to know the technical bit, we white-sailed it all the way with No 2 and full main. There wasn’t really any other option. The beat to the Needles was 100% in control. Ditto the reach to St. Cat’s. After that, the dead run to Bembridge Ledge was very demanding. Because the Sonata is such a small, rounded boat, any big sea under her bum will throw her off…as we found. I don’t think shortening sail would have avoided this. I did look at the rig and then I didn’t, because it was scary. I have a Proctor mast which has put up with untold grief over several years. I have no idea how it stays up there. The beat to the finish was tough. We definitely had too much sail up and a reef would have helped up to Ryde Pier. But I was aware of the bun fight that would happen at the finish and wanted full sail up to manage it against a strengthening tide. No idea whether that was a right or wrong decision but we were a bit punch-drunk by that time and the cockpit crew overrode the front girls and we hung on to the full rig all the way.

Any of you who have done RTI will relate to this account. If you haven’t then give it a go. In my opinion it is one of the best challenges and Sonatas have the capacity to do really well. This year it was a big boat race as the seas were too big to manage comfortably with a 20ft waterline but another time it could be very different. Nevertheless, we put our mark on it as probably the smallest boat to finish.