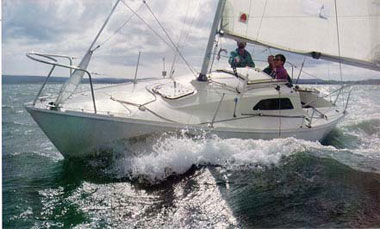 Will there ever be another boat to match the Sonata? I doubt it. Some may, perhaps, sell in greater numbers, but I’d be surprised if any of today’s 22-footers are remembered on their 21st birthdays in the way the Sonata (Snotty, to her friends) was last year. After all, how many boats of any size combine excellent performance with good looks, faultless manners, sound construction, sensible accommodation and tight one-design racing? How many can produce fleets of 30-plus boats at Cowes Week? And how many can you buy for £6,000, ready to race or cruise as you please?

To be fair, several boats score on many of these points—like the E-Boat, for example (see PBO 375) and the Anderson 22 (PBO 364). Along with some other 22-footers of yesteryear, they have their own, unique virtues, which make them stand out. But the Sonata is the one that really caught the public imagination.

The design was conceived at a ‘meeting’ between David Thomas and Hunter’s Peter Poland in a bar at the 1975 Southampton Boat Show (where, incidentally, the idea for the Sigma 33 was born some years later). Poland liked the look of Thomas’s highly successful multi-chined quarter tonner, Quarto, and fancied a slightly smaller version for production building in glass. The result was the Sonata—a pretty, slippery-looking mini-tonner which pro-ceeded to win virtually everything in sight. In Cowes Week 1976, Thomas’s Piccolo trounced most of the quarter tonners boat-for-boat, and went on to win the production boat trophy at the eighth-ton cup in Lymington.

Hunter knew that success under the International Offshore Rule was, in itself, no guarantee of a long-term future; few IOR designs remained competitive for more than two or three years. But the Sonata had much more to offer. Thanks to her roomy accommodation and predictable handling, she doubled as an excellent pocket cruiser for family sailing between races -one reason for her selection by the Design Centre in London. Strict one-design rules were also drawn up to limit ‘cheque-book’ racing, and she became the first racer/cruiser of her size to be awarded National status by the RYA. With these endorsements, and fleet sizes growing, her future was assured long after her days as a competitive mini-tonner were over.

Now, apart from racing as a one-design, Sonatas make their presence felt in CHS and local handicap fleets—including Poole Yacht Club, where John McQuillan’s Selene is one of several which regularly compete. John bought her in 1989, his first boat after several years’ crewing with other people. We arranged to go out on a Tuesday afternoon, so the boat would be ready for the club’s race that evening. John had enlisted the help of two regular crew members, so they’d have enough hands to fly the spinnaker while I circled in the dory taking photos.

First, though, I stayed aboard to put Selene through her paces and see if I agreed with everything I’d read about Hunter’s little wonder-boat. The first thing I noticed when we sheeted home in about 18 knots of breeze was the way she combined crisp, responsive handling with the feel of a much larger yacht. In a seaway, her small size and light weight would probably be more apparent—but if I’d been dropped aboard blindfold and given the tiller, I might have guessed I was on a 28-footer.

Something else that struck me was the trademark ‘Thomas feel’ to the helm. It was almost exactly like the Sigma 292 I’d been sailing regularly—not heavy, but with a constant pressure to make quite sure you didn’t doze off. As with the Sigma, this was a function of rudder shape rather than the boat’s balance, because she carried very little weather helm at most angles of heel.

Her windward speed was impressive for a boat with an 18ft waterline. Making a good five knots into the short harbour chop, Selene tacked through 75 degrees by the compass and would probably have pointed higher in flat water. But she was less ‘twitchy’ than I’d expected; although there was a definite groove in which she really flew, she didn’t punish lapses of concentration as severely as some of her more highly-strung competitors.

To make life easier for the helmsman, John had fitted a foot-bar across the middle of the cockpit—a useful addition, but one which could cause problems for less nimble drivers when switching sides. What with the traveller just ahead of the tiller, a footbar across the middle, and the tiller extension to weave between the mainsheet and backstay, those unaccustomed to small boats might tie themselves in knots at first.

Now, what about going down-wind? David Thomas said that he designed the Sonata to be “a killer to windward”—and she’s proved to be that on many occasions. But he deliberately gave her a non-planing hull because, in his words, “we thought too much planing might frighten family crews and granny!” So he incorporated a pronounced tuck in the hull beneath the cockpit, which stops her breaking free from her quarter wave but helps her go upwind by “sharpening up the waterline”, as he put it. In the colourful language of one keen Sonata racer in Scotland, “what makes them so good to windward makes them dogs downwind in a blow! It’s a shame in some ways—after all, if Sonatas could plane, who’d need sportsboats?”

Not everyone would agree with the canine comparison—but any reservations I had about how she’d carry her spinnaker in a fresh breeze proved to be unfounded. With the apparent wind about 30 degrees abaft the beam, Selene charged along at hull speed with the deep rudder keeping her firmly under control. It took a heading gust pouncing on us from behind Brownsea Island to send her into a mini-broach, but she quickly recovered.

Back on the wind, I tried a few of the standard ‘pirouettes and handstands’ which she performed with distinction. Not only would she bear away from a close-hauled course with both sails pinned in, but she’d spin right round through 360 degrees in the blink of an eye and carry on as though nothing had happened. As John observed, having not tried this strange manoeuvre before, it could be useful if you needed to kill a few seconds approaching the start line.

So, any complaints? From me, nothing of consequence. As on most small boats, the guardwires don’t let you lean back very far when sat on the quarter deck and I found the traveller, bridging the gap between the seats, too short to be effective (though the class rules allow you to fit a full-width one in its place). John has equally few gripes, most of which relate to the Sonata’s size. “I’d like an inboard engine, because it’s a pain having to hump the out-board in and out of the cabin. It stays on the transom if I’m cruising, but goes below for racing. I’m not even going to consider changing anything, because it would add weight and make the boat unsaleable as a competitive Sonata.”

He’d also like standing head-room, but acknowledges the restrictions of a well-proportioned 22-footer. This leads to the obvious question: has he ever considered changing boats? “If I could get a bigger berth, I might be tempted to go for an Impala. But for now, this one suits me fine—and she’s easy to sail on my own if I want to.”

After her launch in 1976, it took the Sonata just three years to reach the 300 mark, and another three to make 400. A total of 479 boats were built before production ended in 1990. The Sonata’s hull was also used for the Duette, Hunter’s first design to feature ‘twin fins’, as they like to call them. A few centreplate Sonatas were sold—with a cast iron plate which retracted into an external ballast keel—but there was demand for a version which could dry out upright. In the event, the Duette’s performance surprised even her designer who said: “it was just like sailing a Sonata with four men on the rail.” Thomas had increased the ballast to maintain the same waterplane as a fully-crewed Sonata, and so avoid the excessive liveliness which could otherwise result from her floating higher on her marks with a small crew. In the words of Hunter’s Andy Cunningham, “he took two fat men off the side decks and put them in the keels instead.” After 87 Duettes, the same hull was again used for the twin-keeled Horizon 23 (now the 232) in 1990. The Duette’s sleek lines were disguised by a higher coachroof to give full standing headroom, plus a swept spreader rig with a smaller, self-tacking jib. Inside they found room for a more modern, open plan layout complete with a separate heads compartment and double cabin in the stern. Over 200 have been built to date.

Hunter were one of the first companies to use unidirectional and woven rovings in a production boat, which helped make the Sonata light but tough. Structurally, there have been few problems of note apart from the odd mast taking a tumble in heavy weather, partly because of the minimal sweep-back on the shrouds. In fact many racing owners have moved their masts back to the maximum tolerance, which effectively gives them in-line caps—but the class rules now allow runners for extra support on breezy downwind legs.

Compared with most sprightly 22-footers in the mid-’70s, the Sonata was roomy and comfortable below—and even by today’s standards, she’s far from cramped. Selene was fitted out for cruising by her original owner, who built in more elaborate shelves and lockers along the hull sides than were standard. John compensated for this extra weight by getting rid of the heavy stainless steel cooker, and swapping the chemical loo for a bucket.

Sitting headroom over the saloon bunks is a comfortable 40in, and there are two more 6ft berths in the forepeak—though on most racing Sonatas the space is used for sail stowage. 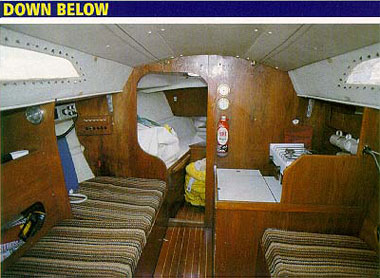