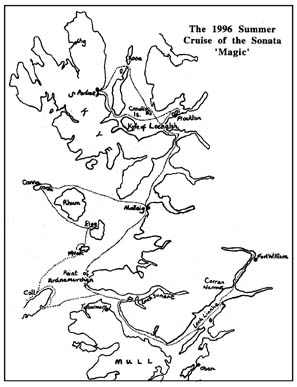 Is the Sonata only for Racing? With the NW of Scotland’s cruising ground on our doorstep, racing is only half of the story. With a settled ‘high’ just established over the Western Isles, Magic slipped her mooring in Loch Linnhe and caught the last of the ebb through Corran Narrows, before the sun, or even the children, were awake. We soon got into the holiday mood and enjoyed excellent sailing to Drumbuie in Loch Sunart. Another dawn start gave us time for a swim before lunch from the anchorage on the little island of Coll.

The next day and a half were spent exploring. We had long golden beaches to ourselves, and whilst swimming, were joined by two inquisitive seals. By using the Martin Lawrence pilots to supplement the charts, we were able to pilot our way into some superb anchorages. We visited Muck, Eigg and Canna. An immense sense of history litters these island landscapes that were once inhabited by five times the population. Ruins show the extent of the forgotten crofting Clusters of walls poke up above the bracken, and at low tide there are the remains of stone fish cages in the shallow inlets. For Hannah and Joe there was just so much to learn about. We were beginning to look as if we had been at sea for months, so it was time to call in at Mallaig for fresh food and a hot wash in the new toilets.

Magic has lots of extras for cruising. We carry a storm jib and a third reef in the mail which allows us to sail comfortably when the wind really picks up. We tend to reef early and avoid lots of the dramas usually associated with being over-canvassed. Its lucky for us that the two children have always thought that rough weather is part of the adventure and really like it when spray and waves come over the boat. Magic also has possibly the first home constructed outboard well. It’s in the same place as the later factory mark II boats. The outboard is instantly ready for use, it’s forward of the rudder with its weight low and central, the prop is always in the water, and it can’t be dropped over the back. We also have a full length stainless steel pushpit and a boarding ladder fitted to the now unused outboard bracket on the transom This ladder makes climbing aboard after a swim or trips ashore so much easier. We also have a spray hood which is invaluable for cruising. Below, Magic feels comfortable with an adequate galley and a folding table.

After double checking tide tables we made for the Kyles of Lochalsh, enjoying fantastic weather, sailing and scenery. Hannah and Joe even enjoyed a game of rummy as we went. After anchorages at Plockton and Portree, the call of the wild beckoned again and we headed for the uninhabited Crowlin Islands. An intimidating, rock sided channel only 20m wide separates the two islands. Entering at low water with less than a metre under the keel, we could only marvel at this amazing place once the hook was bedded in within the pool and our swinging room adjusted.

Hannah and Joe rowed around looking at the crabs and the starfish in the tropical-like clear water. Mackerel were on the menu again, a benefit of September sailing, and time for our blood thirsty crew to use winch handle and knife. These islands were once inhabited and are even now still farmed. On the east shore, raised caves are used as sheep holding pens and for shearing. The only signs of modern times though, are the bottles of worming drench left there in one of the caves.

Two more days of good sailing, needing more in the way of suntan oil than reefs, brought us back to Mallaig. Gill, Hannah and Joe, with a few days less holiday had to return home to Fort William. I was joined by a friend and we set off for several days serious sailing. However the weather took a definite dive for the worse overnight, and this autumn’s continuous succession of gales started. The plans were revised, and after a wild, wet and bumpy bash round Ardnamurchan Point into the teeth of a stiff south-westerly, we took the shortest way home.