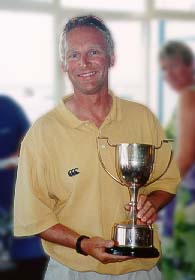 Jack: Many thanks Steve for agreeing to do this interview for the Sonata web site. Tell me, how many times have you been National Champion of the Sonata Class?
Steve: Well we started in Sonatas in 1991 sailing Gizmo but it wasn’t until 1994 that we won the Nationals. We’ve managed to hold on to the title every year since then, but sailing is always in the lap of the gods.
Jack: In that time you must have been out in some pretty heavy weather.
Steve: Yes—particularly in the big boat races like the Scottish Series at Tarbert. I have to admit it’s only a few weeks since we broke our mast and smithereened the kite in the Winter Series on Windermere.
Jack: You must tell us more about that one.
Steve: Well, it was a pretty windy day and we were hit by a particularly nasty gust. The boat broached and rolled to windward and we tried to hang on too long. When the masthead hit the water, the boat was moving quite fast and the sails were still pulling. The mast went into a really big bend and something had to give, so the spreader punched its way through the mast wall.

Keeping the mast up is the limitation on sailing a Sonata in really heavy weather. The boats will take almost anything but beyond a certain speed downwind the hull shape won’t allow the boat to go any faster, so if you get a strong gust then the rig takes the whole force.

Jack: Let’s start with less extreme conditions. Say we’re sailing upwind with the No. 1 Genoa and a full main and we’re struggling to keep the boat flat, what’s your advice?
Steve: Under No.1 Genoa we sail with the main traveller in the middle of its track. The clew outhaul will be pulled out to the black band. As we become overpowered then we leave the main sheeted in the middle of the track and we progressively pull on both kicker and backstay. The kicker bends the bottom part of the mast and the backstay bends the top part. It should be possible to get the mainsail board-flat. Increased backstay tension also flattens the genoa by reducing the sag in the forestay. The genoa cars can come back about three holes from where you would set them in medium winds. There’s no point in moving them any further back since it doesn’t make any difference.

It’s then a question of keeping the boat at its maximum speed and feathering up in the gusts to avoid too much heel and gain a little ground to windward. Once the Sonata reaches a certain hull speed to windward then there’s simply no more speed to be had and all you can do then is to point.

Jack: How do you make best use of your crew weight?
Steve: It pays to concentrate weight on the wide part of the boat but I see a lot of foredeck crews who have a tendency to drift forward. This means they’re sitting on a narrower part of the boat and their weight is tending to make the bow plunge. Our middle-man sits behind the stanchion with the foredeck man tucked up close to him.
Jack: Suppose the wind keeps increasing to the point where it’s difficult to sail with the genoa and full main, what would you do?
Steve: If the wind is stronger then you start to experience a classic problem: the tiller goes heavy and you want to let out the main but as soon as you let the boom down to leeward the whole mainsail starts flogging. If this happens then either the jib sheet leads are too far forrard or the main is too full.You can sail with the first third of the genoa lifting but there comes a point where it’s impossible to keep control, especially in waves. We’d try to hang on to the genny until the end of the first beat and change down to the No.2 Jib on the run. I wouldn’t advocate sailing with the genoa and a reefed main because the boat won’t point: the genoa will take over and you’ll be pushed off sideways. Save the mainsail reefs for even stronger winds and use them with the No.2.

Changing to the No.2 makes quite a difference and should get you comfortably back in control. With the Sonata rig, it’s difficult to keep enough tension in the luff of the jib. As the wind rises you need more and more rearward force on the mast to reduce luff sag but you’ll soon run out of backstay. Putting too much tension on the backstay causes the mast to bend too much and the mainsail to break-up. Once the mast reaches the maximum bend for the cut of the sail then the only way to control the sag in the jib luff is to let the traveller down the track and pull hard down on the mainsheet to pull the mast back.

Jack: How do you know when the mast is bending too much?
Steve: You’ll see creases coming out of the clew and reaching up to spreader height. To remove the creases, pull on the cunningham and mainsheet and ease the backstay a little.
Jack: Do you have a guideline for setting the No.2 jib?
Steve: We usually find our jibs set well with the leeward shroud lined-up with the centre of the clew ring. Don’t oversheet the jib or it will close-up the leech at the top.
Jack: OK so we’ve reached the windward mark, how do we get down the reach?
Steve: Remember to ease the kicker before you bear away or the tension will be converted to a sideways force on the mast. In strong winds you can leave the clew outhaul as it is. On a windy spinnaker reach, one person should be in control of the kicker the whole time and should be easing it in the gusts. Reducing kicker tension will keep the working sail area forrard and knock-off the weather helm. The backstay is also a useful control when you are hard-pressed on a spinnaker reach: you can bend the mast and almost make the main disappear. The spinnaker should never be over-trimmed; keep it just on the break.

Jack: And on the run?
Steve: As you come round the weather mark onto a run then you can let the kicker off a little. Don’t let it off as much as you would for a reach or the sail will twist and you’ll be in for a “death roll”. On a Sonata, the forestay tends to go slack on a run and the backstay no longer has any effect on mast bend, so keep the backstay fairly firmly on. In lighter weather we would let the clew outhaul off about four inches for a run but in heavy weather you can leave it pulled out to the black band. Don’t let the guy out too much: if you can pull the pole back a bit then the foot of the spinnaker will be tighter and the air flow will be more stable. It also helps to pull on the leeward twinning line a bit.

The conditions will dictate how close you can sail the direct course to the downwind mark: sailing by the lee is very dodgy in strong winds. Keep steering so as to keep the boat under the rig.

Jack: Where do you put your crew weight?
Steve: When it’s windy, get your crew back and low down. Our cockpit man has the front of the cockpit and the foredeck man is on the back pushpit opposite me. It’s important to keep everybody down and locked-on to the boat. When we broke our mast we were changing the jib. This is a dangerous moment with the weight of the foredeck man on the bow: the middle man should be plastered against the guardrails at the back of the boat.
Jack: Do you have any tips for surviving the heavy weather gybe?
Steve: It’s possible to gybe a Sonata like a dinghy with everybody back and then to run forrard and do the pole. Get the guy under control and let the sheet flap if necessary. If the lee twinning line is half-on it will stop the sheet flapping itself over the end of the boom.
Jack: And the spinnaker drop?
Steve: If it’s really windy then a leeward drop is safer: ease the guy and collapse the spinnaker behind the main.
Jack: Have you modified any of the gear on the boat for heavy weather?
Steve: Often people put-up with gear on their boats that doesn’t really work: for instance they have a clew outhaul that needs to be put on a winch. You can get away with it in medium winds but not in the stronger stuff because adjustments will be too slow and you’ll need the winch for something else. When people come and sail with us they are often impressed with how easy it is to pull the strings and adjust things. We haven’t spent a great deal of money, we’ve just put a lot of thought into having sufficient purchase and leading the tail of the rope and the cleat to the right place. For instance, think about who is going to play the kicker on a windy reach and make sure they can cleat and uncleat the kicker and get a strong pull on the rope without moving their weight from the rail.
Jack: Do you set-up the standing rigging differently for different wind strengths?
Steve: In theory you could but we don’t. There’s a balance to be struck between your ability to set the optimum and your ability to repeat it. Pick a set-up that you know will work in a wide range of conditions and you won’t need to think about it. It seems to me that in that in all classes of racing boats there is too much fiddling around with settings. There comes a point when the best thing is to stop tuning and go out there and sail!
Jack: And there’s more information on your own own web site?
Yes, the Goacher Sails site has a special section devoted to Sonatas, with a tuning guide and some more sailing tips. 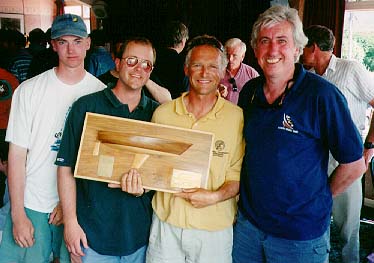