The following history has been provided by Matt Glasgow, drawing upon various sources, including an anonymous article in the 1989 class handbook.

Creativity in the beer tent.

On a cold afternoon at the 1975 Southampton Boat show, David Thomas and Peter Poland met in a draughty beer tent. By the time he had left the tent, David Thomas had agreed to draw up a provisional new design for Hunter Boats that would be about 22′ long and faster, prettier and more exciting than anything else afloat of comparable size. Three weeks later, Peter Hornbrook visited Hunter Boats and asked if there was anything new and interesting in the offing. He was shown the first drawing of what was to become the sonata and said that he would have one. From this the Sonata 7 One Design was born.

The Sonata owes its rapid emergence as a leading One Design Cruiser Racer Class to the initiative of the first brave man who ordered a boat (at a time when VAT had just gone up to 25%) when there was no more than a profile drawing to be seen. It was decided that a set of One Design Rules should be formulated before the first boats were built or sailed. This was duly done and an initial Steering Committee formed to see the Class through its formative months. 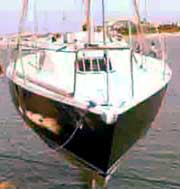 The first Sonata was launched in May 1976 and others followed in rapid succession so that there were enough around the coast to make a dramatic impact on the sailing scene in their first season. Lain Duncan dominated the Clyde and won the trophy of Outstanding Yacht in the Tobermory Series. David Thomas entered Piccolo in four Cowes Week races and was never out of the top three in the highly competitive Class 5 open. Piccolo was also a narrow second overall and first production boat in the International Eighth Ton Cup. Sonata also collected overall trophies at Poole, Burnham and the Channel islands. And all the while groups were growing to form the nucleus of the One Design movement that was to come.

In 1977 fleets blossomed on the Crouch, the Clyde, the Solent and Windermere. The first National Championships were held in Harwich and attracted 15 entries. Open events were also held on the Clyde, Solent and Windermere. In addition the Sonata Class Association was affiliated to the RYA and the Sonata herself became only the second cruiser ever to be selected by the Design Centre in London. In the wider fields of open handicap events, Sonatas came first and third overall and first and second production boats at the UK MiniTon Championships and amassed numerous dramatic victories at Cowes Week, Poole, the Crouch, the Clyde, EAORa, Northern Ireland, the Menai Straits, Falmouth and the Lakes, as well as in Holland, Norway, Sweden, Germany, Belgium and Hong Kong. Sonatas also won 16.0′ IOR level rating series at Cowes Week, Burnham, Poole and within the Solent Points.

The first AGM was held in London and owners expressed satisfaction at the Committee’s handling of the Class administration. The year saw dramatic growth on the South and East Coasts as well as in Scotland. The Nationals for this year were held at the ISC in Cowes. 28 boats entered and it was nice to see a Dutch owner finish second. Well-supported Scottish, Southern, Eastern and Northern Championships were held as well as numerous seasons’ points series. Sonata continued to dominate major Open Handicap events, with outstanding Class victories in the Round the Island, Cowes Week, Whitby Week, Falmouth Week, Scarbough Week, Strangford Lough Week and Bridlington Week. Sonatas were also overall Class winners in the season’s points series on the Medway, in Fowy, Falmouth, Strangford, Scarborough, Royal Northern (Clyde), the Crouch, Hayling Winter Series and Oslo season IOR.

And Hong Kong should not be forgotten; the fleet continued to grow and an Area Association was formed. Perhaps the most interesting accolade of the year, however, came from the Sunday Times when their panel of experts judged the Sonata to be the best One Design Cruiser Racer of her size in the UK.

In 1979 the Sonatas grew in number to pass the 300 mark, with 220 in the UK. There were 12 fleets with 5 or more boats, the four largest at that time being the Clyde (29), Solent (23), Crouch (20) and Chichester (18). New fleets were forming at Medway, Scarborough and the Moray Firth. It was in 1979 that the Hayling Island Fleet grew dramatically with an excellent One Design Calendar in conjunction with CCRC.

1980 saw a consolidation of the Sonata Fleets around the country with a very successful National Championships off Harwich, based at the Haven Ports Yacht Club. It was during 1980 that negotiations took place to attain National Stature from the RYA. To achieve recognition from both bodies was a major success and instantly placed the National Sonata in a unique position in yachting and provided the Class with very solid credentials for the future.The 1981 season started with frenetic activity of boat measurement and by the end of the season 60 boats were correctly registered. The National Championships held at Hayling Island Sailing Club were the first to be run to National Sonata rules. The Nationals were the highlight of a year of economic depression which seriously affected Sonata growth.

However, in early 1982 the 400th Sonata was built. The Class received another vote of confidence from the RYA when they supplied their Youth Sail Training scheme with 3 lifting keelers based in Langstone Harbour. The boats were seen regularly around favourite haunts in the Solent.

One Design classes have become a significant force in Yachting with proportionately higher turnouts than the IOR classes. The National Sonata has been a familiar sight in racing around the country and in Hong Kong (the largest overseas contingent of over 30 active boats) with Class starts in Cowes Week, Tomatin, Burnham Week, Round the Island and most major events. After the euphoria of the first five years of the National Sonata’s existence the various fleets settled down to consolidate their positions. National and regional championships have been held regularly each year and a highly successful International was held in Hong Kong in 1986, using all 26 boats in the Colony.

Although the production of the National Sonata came to a halt in 1990, the association plays a very activate role in keeping the heart of the Class beating.

Today it is possible to see that the fleets of boats have moved around the country, with the largest fleet at the time of writing being composed of at least 30 boats at the Medway Yacht Club.

The Association has nearly 300 members on its books today, which is a tribute to the hard work of the chairpersons and committees over the years. There are six area championships, and class starts at many major regattas. Class racing takes place most weekends all over the country.